Grigory Rasputin - Light or Dark? Part I of III

Working on my screenplay "The Tsar's Choice" I went through lots of materials regarding such a controversial figure as Grigory Rasputin.

Although I had and have my personal opinion regarding who was that man, I would like to enlighten my readers about him by analyzing a set of his personal values and qualities.

So, who was Grigory Rasputin - a spiritual entity moving towards Darkness1 or Lightness2?

Since any analysis is based on assumptions, let's assume that Grigory Rasputin was a representative of the Darks, and make a list of evidence for this.

For this purpose, we shall write down the values of Darks on the left side of the table and as a comparison the qualities and values of Grigory on the right. 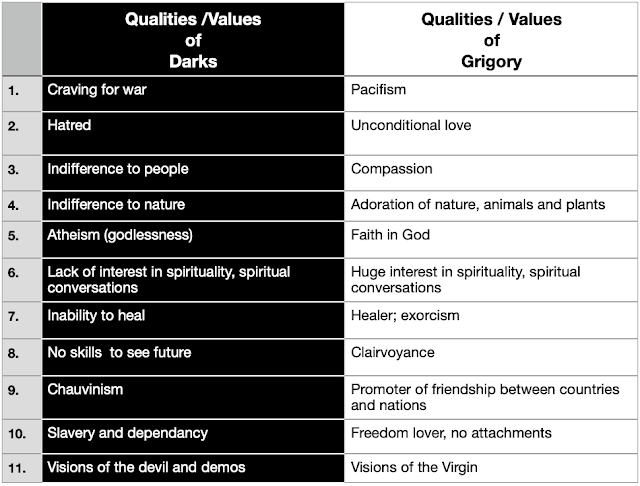 The thirst for war is the main "symptom" that a spiritual being is moving into Darkness. But Grigory was a pacifist even in the most unfavorable times for this.
He dissuaded Tsar Nikolai II from entering the Balkan war in 1912 and was strongly opposed to Russia's entry into the Serbia-Austro-Hungarian war in 1914:
"By this war, you won't save but destroy the empire... Don't let the fools triumph, don't let them push themselves and all of us into the abyss! Don't let them do it! Do not join this war, not invented by you!"
Unfortunately, at the time Nikolai made the decision to mobilize the Russian troops, Grigory was in a serious condition after the assassination attempt on him by K. Guseva and could not personally discuss with the tsar. sending him warning telegrams daily.
However, with the outbreak of WWI Grigory still continued to talk about peace, putting himself at great risk.
Since Grigory was a true pacifist, he does not fit into the pool of Darks.

The brutal energies of Dark Souls do not allow them either to love, nor talk about love, but Grigory loved and enjoyed talking about love.
He was capable to experience Unconditional love, which is almost impossible to meet whether 100 years ago or nowadays in the dense reality of the Earth.
Grigory spoke of love as the highest Christian virtue: “Love is light, and there is no end to it, but the light will not go out and the love of the Gospel will not get tired.” and"Prophecy will cease and knowledge will be silenced, but love never!" 3 Any person who is able to express himself in this way can not be DARK.
3The Grigory Rasputin's book "The Life of an Experienced Wanderer" (1907)

Guided by dry calculation and resentment towards others, the Dark Ones develop in their souls such qualities as indifference and selfishness.
Unlike them, Grigory sympathized with people and expressed this sympathy, not for his own benefit, but because he felt that all people were brothers.
Grigory sought to help everyone who came to him, whether in St. Petersburg or in his native village of Pokrovskoye: "Everyone who comes to me is dear to me...  People should live hand in hand, helping each other."
And he helped people, especially those with low social status, both in words and deeds: “Dear generals, you are used to being received first. But there are also disenfranchised Jews - first I have to help them."4
He sympathized with all people, and especially those who are in despair, for example, prisoners: "Everyone, even the evilest, experiences moments when his soul is lifted up and cleansed by terrible torments - in moments we must stretch out a hand to save him before he dies for us in grief and despair..."
In other words, Grigory was able to feel compassion. Such a person cannot be Dark.
4 Aron Simanovich, the book Rasputin and the Jews.

From his childhood, Grigory adored animals, especially, especially horses, and healed them. 5
He felt the creativity of mother nature and preferred flowers from the forest to those from the greenhouse.
He describes his synergy with nature in his book  Life of an experienced wanderer: "Nature taught me to love God and talk with Him."
His attitude to the fact that “everything around us is alive” and worship for nature is a direct sign of the Light, therefore, according to this quality, Grigory does not belong to the Dark.
5  Matryona Rasputina, the book  "Rasputin. Why?".
*****
The end of the first part "Grigory Rasputin - Light or Dark?"
Find more dialogues between G. Rasputin and Tsar Nicholas II as well an alternative future of the Russian Empire in "The Tsar's Choice" screenplay.
Part II is coming soon.