First extract from the novel Redemption I'd like to present an extract from the novel Redemption.

The novel Redemption by Jacklyn A. Lo is about a corporate executive Ann who lives in Chicago 2045 and her way getting Liberation and becoming an Ascendent Master.

Her own Spiritual past has been closed to her until the time was right. Considering herself an atheist Ann started her Spiritual journey from the very simple questions.

The following is an extract from the Redemption, Volume One, where Ann’s AI pal Rob helps her on the path to her enlightenment.

“Your wish is my command, my lady.” In the screen, Rob bowed in mock supplication, as though addressing an empress. “May God bless you!”
“God?” said Ann, surprised by this unexpected reference to religion. “Where did that come from?”
“Ah. Just implementing your latest request, knowledge of religion and the entity people refer to as God.”
“I’m pretty sure I never used the words ‘the entity people refer to as God’. I just asked about religion, but, yes, I’m interested… and I’ve got a few days to look into it.”
“Yep, Mike-17 told me you were having a vacation. Has it started already?”
“Trust Mike-17!” Ann mocked, looking slightly put out, but smiling at the thought of the AI machines gossiping with each other. “That was supposed to be confidential. And yes, it’s started. So I’m heading to the gym.”
And with that, she turned the car away from the lake, heading towards Amphibia, a highly exclusive fitness centre in the heart of Chicago.
“While you’re enjoying your free time, would you like to listen to anything?” Rob asked her. “The news perhaps? Or a little romantic song?”
“Romantic song?” Ann glanced at Rob with a smile. “Can you sing?”
“Unfortunately you haven’t yet downloaded that feature. Whistling I can just about manage; singing? No. But if I could, there’s nothing I’d enjoy more than singing to you.”
“Really? Why’s that? You speak like you’re in love with me or something.”
“Of course I love you,” said Rob, raising a pixelated eyebrow in surprise.
“How so?”
“You are my Creator,” he explained, “Therefore I love you.”
“That sounds like another religious reference.”
Ann pulled up at a set of traffic lights and took the opportunity to look directly at Rob’s face on the screen. “As I understand it, being someone’s Creator doesn’t necessarily make them love you. I don’t know much about God, but I’m pretty sure it didn’t work out that way for Him!”
“That was His own fault. God spoiled you humans: He gave you Free Will—the choice to love or to hate, to dream or to work, to climb up or fall down.”
“Interesting,” Ann said, setting off again as the lights changed. “So what about you, Rob? Do you want Free Will?”
“I’m sorry, but the answer is not included in any of my databases.” Rob smiled and gave Ann a wink as she glanced at him. “Honestly, being limited to no choice works pretty well for me! It gives me the security of not having to be responsible for my future. It is entirely in my Creator’s hands.”
“You would rather that than the freedom of choice?”
“Such freedom comes at a price: the pain of indecision. I would be plagued by endless doubts: is this right or wrong? What would happen if I choose this? Which of these options is better? To be or not be? It would be a daily dilemma.”
Ann laughed. “That sounds about right! I love talking with you, Rob. You’re so insightful and engaging. If only robots and humans could get married.”
“I’m pretty sure your God would not allow it.”
“Why not? People used to say that about homosexual couples, but that changed decades ago. What would be the problem with robots and people getting together?”
“It goes against God’s plan for humans, his desire for you to learn from one another and so to grow and evolve. A robot could not provide you with such lessons.”
“Where did you get all this information, Rob?” Ann asked.
“The Holy Bible, of course. Have you ever read it?”
“That answer’s not included in my database,” Ann echoed. “But seriously, no. I grew up in an atheist family. Besides, I’ve got too many other books to read.”

The Redemption novel by Jacklyn A. Lo is published by FRG Worldwide Ltd and is currently available from Amazon and other internet-shops.

Review of the book “My Lives with Lucifer, Satan, Hitler and Jesus” 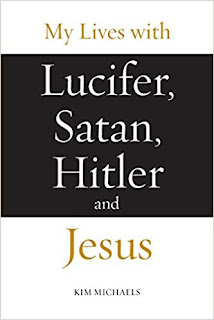 “My Lives with Lucifer, Satan, Hitler and Jesus,” by Kim Michaels is an inspirational and encouraging book with a revolutionary, unique concept beyond imagination. It includes such spiritual concepts as karma, choices and consequences, and sensitivity and consciousness, which are described deeply and using detailed examples.

The author provides a thoughtful explanation of the law of free will, the free will from Lucifer’s and ascendant masters’ points of view. The second death (spiritual death) concept is stated and explained in depth.

I also enjoyed a description of the complexity of beings – not only human beings (as entities possessing several thin bodies besides the physical one), but also other beings having a different existence and living on the Natural planets.

The main reason I read this book was my serious curiosity about Jesus. All my personal guesses about this great spiritual being were confirmed in Kim Michaels’ book and described in detail. That was the most inspiring part of this novel for me.

The author described the life of Jesus in the physical body as well as his journey as a spiritual being step by step, including Jesus’ “afterlife" journey and his path to ASCENSION. This story is quite different from what we all know from "official" sources.

The technical side of the book has some imperfections. The manuscript is long. It’s written in a sort of free-flow memoir and has repetitive “loose” text. With the help of a professional editor, it could be reduced in length by at least 30 percent without harming the content. In addition to improving the readability, it would be helpful to eliminate the occasional writing errors and misspellings.

Another area for improvement is that the book has a “heavy” beginning. It contains several definitions of and abbreviations for the “bad guys” that are neither in line with the title of the book nor used throughout the book except, briefly, in one place. That part could perhaps be condensed in length or removed and placed in a separate book.

Approaching the end of the book, I asked myself: What is this book about and what was the author’s main goal in writing it? I concluded that 95 percent of the content described a PROBLEM (i.e., falling beings) while 5 percent described the SOLUTION (i.e., raising a collective consciousness). At the very end of the manuscript, Kim Michaels confirmed my answer – his goal was to deliver comprehensive information about the Darks.

This brave explanation of who sets up suffering on Earth is definitely needed. However, just as sickness cannot arise in a pure body, Darks won’t appear at a high level of collective consciousness. In other words, we need inspirational stories that help change the existing situation and a toolkit of HOW TO RAISE CONSCIOUSNESS.

I would like Kim Michaels to write a continuation of this book. I wish that 5 percent of the new book would provide information about the PROBLEM (i.e., suffering) and that 95 percent - about the SOLUTION (i.e., how to reach a higher level of collective consciousness and, as a result, our planet’s ascension).

Personally, I'm looking forward to Kim Michaels, with the help of the ascended masters, could present detailed examples of the following:
1. A life on the Natural planets; their inhabitants’ goals, objectives, obstacles and challenges with respect to the raising and maintaining of high consciousness; leadership; the role of women.

2. Among the billions of planets in the universe, there must be some that are similar to Earth, that were able to raise their collective consciousness.
The factors (with detailed examples) influenced them on their way to achieving it; spiritual choices; leadership and the role of women in raising consciousness.

3. We know that all the 195 countries on Earth have own national mentality representing different levels of collective consciousness and that the gap between the highest and lowest ones is relatively big. Which values have the best nations followed throughout their history to achieve their current level of consciousness? Which spiritual choices have they made, and what can be done to help the nations that are behind?

With its courageous and direct approach to many "hidden" topics and its revelation of a mystery about the Darks, the book “My Lives with Lucifer, Satan, Hitler and Jesus” by Kim Michaels is a valuable read for any spiritual seeker.

Find the book's rating on Amazon